Hello there, and welcome! Today I wanted to write a lil’ review on the Urban Decay Troublemaker Mascara | £19.50/£9 | that I have been testing out since the start of the year. I have the mini size as I obviously didn’t want to buy the full size if I ended up not liking it! You’ll have to excuse the up-close shots of my eyes, it was my first time using my new camera and I have never tried taking photos of my eyes before haha! But in order to give a better review I knew I wanted to show you how it applies, at least on my eyelashes. So without further ado, I hope you enjoy!

Firstly, the packaging is a thick plastic that appears to give a multi-coloured duo chrome effect; fancy. It feels as though it is unlikely to break though despite it being plastic, so it has a point for that. As it is a mini size the length of the wand is very short, which I found made it a lot harder to actually use the mascara, as it kept touching my eyes when applying, so bear that in mind if you ever try out the mini.

The wand is a plastic one, not the typical brush type, which I don’t mind as I’ve found that both types work well for my eyes. There are two types of bristles on the wand, longer ones and shorter one, which I believe are to ensure that all eyelashes are caught when using it. The problem I have with this though is that I found it very easy to poke myself in the eye with the longer bristles, especially when trying to apply it on my lower lashes, and the other day I actually pushed an eyelash into my eye because of the wand: not a fun time. I think this is where a brush type mascara comes in handy, as you can still poke yourself in the eye with it, but it is not as sharp as a plastic brush is, making it the better option if you are someone who does it quite often.

In terms of the actual formula, it is by no means my favourite, but this could also be influenced by the fact that I don’t find the wand to be the easiest to use. This can definitely appear to be clumpy when you apply it, even only with one coat, as you can see in the below pictures: 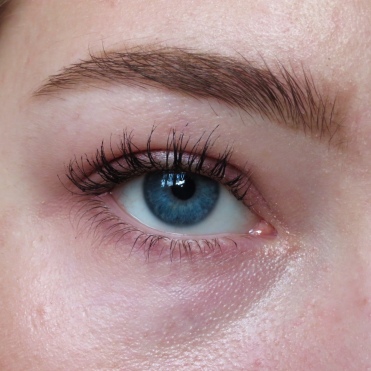 I found that it doesn’t really separate my lashes in the way that I want it to, and combined with the fact that the wand is harder to use, I find it a bit of a chore to use it. If you are someone who has bigger eyes and like clumpier formulas to give your eyelashes a boost, then you might like this. However, my eyelashes are quite long and curled already, and so I only really need a bit of volume, but I don’t enjoy the clumpy look. I also applied a second coat as well to show you how it built up, and as you can see, it doesn’t really change much between coats, apart from look a little blacker:

So, what is my verdict on this? I don’t think I would buy it in the full size, or ever again, as I have used other mascaras that I felt suited my eyelashes better, such as Perversion by UD, which has a brush wand instead, and a slightly thinner formula. If this sounds like a mascara you would like then I’d say always try the mini if they have one, as despite the claims that the formulas differ between mini and full size, it still should give you a good idea of what the mascara is like, and a good look at the wand too!

I hope you found this interesting, and let me know if you have tried this mascara before! Did you like it? Have you repurchased it? I want to know!

Hi, I'm Emily! As I slowly try to figure out what I want to do in life, I am dedicating my time to bring you a range of beauty + lifestyle posts. I hope you enjoy!